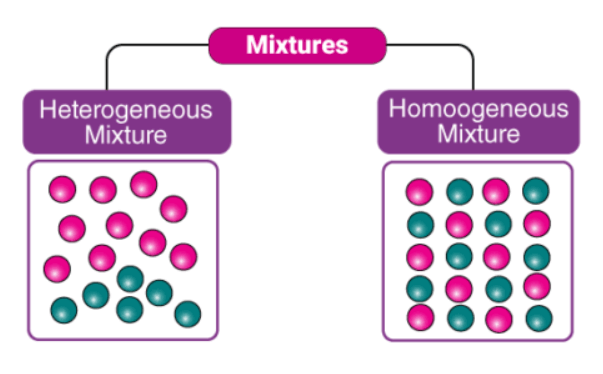 A mixture is characterized because there are two or more substances or elements that are united, but not chemically combined, and because it is possible to separate them.

On the contrary, the elements of a heterogeneous mixture are distinguishable with the naked eye and their distribution is not uniform. Heterogeneous mixtures have at least two different phases (solid and solid, for example). A bowl of cereal with milk is an example of a smorgasbord.

What is a Homogeneous Mixture?

A homogeneous mixture is a mixture that is in a specific state of matter (in a phase), in which the elements that compose it are mixed uniformly and in such a way that it is not possible to differentiate them with the naked eye. This type of mixture is also known as a solution or dissolution.

The quality of being homogeneous means that no matter where a sample of the mixture is taken from, the distribution of its components will remain uniform. That is, the particles that make up the mixture are distributed in the same way throughout the solution.

The components of a mixture are found in such a way that it is not possible to differentiate each one of them with the naked eye. This means that, to be able to observe each component of a mixture, it is necessary to have some type of apparatus (for example, a microscope).

Characteristics of a Homogeneous Mixture

Each phase that forms a state of matter maintains its properties and chemical composition under specific conditions of temperature and pressure. If these conditions change, the phase is modified, passing to a different state of matter. An example of this occurs when rock melts due to a rise in temperature.

Components of a Homogeneous Mixture

A homogeneous mixture or solution is composed of at least two substances that are found in different amounts in it. The solute and the solvent

A solute is the substance that is found to a lesser extent in the homogeneous mixture. It acquires the shape and characteristics of the solvent (since it dissolves in it) and has a boiling point higher than this. The most common phase it is in is the solid state (although it is also in the other states).

An example of a solute is ground coffee that is mixed with hot water to make a cup of coffee.

The other component of a homogeneous mixture or solution is the solvent, which is the substance that dissolves the solute. The solvent is found in a greater proportion than the solute in a solution and determines in which phase or state of matter it will be found. Generally it is a liquid, the solvent par excellence being water.

Properties of a Homogeneous Mixture

Another property is the solubility of a solution, which is the maximum point at which a solvent and a solute can no longer dissolve. In this case the solution may be:

Factors that affect solubility include polarity and volume (size) of a substance’s molecules, pressure, and temperature.

The distillation is a way of separating homogeneous mixtures consisting of liquid miscible (soluble) or a liquid and a solid. In this case, the liquids are separated by boiling. Once the boiling point of one of the components is reached, it evaporates, separating from the other. An example of this happens when alcoholic beverages are distilled.

Another way of separating homogeneous mixtures is crystallization. In this, it is sought that the solute in the non-solid phase loses solubility, through its transformation into a solid. This can be achieved by evaporating the liquid, cooling it, causing a reaction in it or adding some other element. An example of this is found in the production of salt from sea water.

Other separation methods are chromatography, evaporation, and solvent extraction.

What are Heterogeneous Mixtures?

A heterogeneous mixture is a mixture that is in at least two different states of matter (two phases), its components are mixed in a non-uniform way and it is possible to differentiate them with the naked eye.

The properties of each component of a heterogeneous mixture do not change when mixed. When its components are mixed, particularly in the liquid state, they are immiscible. Miscibility means that one element is soluble in another (for example, table salt in water in a homogeneous mixture).

Characteristics of a Heterogeneous Mixture

That is, a heterogeneous mixture can be formed by two liquids that can be separated and differentiated with the naked eye, because each one maintains its own phase and particular properties. The same is true if two or more solids are mixed, as in the case of a powdered pepper mix.

When the components of a heterogeneous mixture are in different phases (for example, a liquid and a solid), this mixture is known as a suspension.

Suspensions are characterized by the fact that the solid does not dissolve in the other component, be it a gas or a liquid. Even if its components are stirred, they will eventually be found in separate portions of the mixture.

The particles that make up the solid of a suspension are of such size that the Earth’s gravity has an effect on them, overcoming the force that would bind them to the other substance. Furthermore, it is possible to separate the mixture by means of filtration.

Sand mixed with water is an example of a suspension. If they are placed in a container and shaken, the sand will eventually settle to the bottom of the container.

Another type of heterogeneous mixture is known as colloids. In these, the particles are smaller than in the suspensions, they can only be observed through a microscope and it is not possible to separate them by means of filtration.

These are characterized because their particles are capable of scattering light when it passes through a colloidal mixture, becoming visible, creating the Tyndall effect (in honor of the Irish physicist John Tyndall, 1820-1893). This phenomenon is due to the size of the particles of the colloid mixtures.

Mayonnaise is an example of a colloid. Specifically of an emulsion, since its main components are in a liquid state and one of its elements work as an emulsifier. The ingredients that are normally used to make mayonnaise are oil, water, egg, etc. Water and oil are not soluble in each other, which mean that they are immiscible.

In the case of filtration, this consists of separating the components of a mixture that are in different phases or states of matter, specifically a non-soluble solid and a liquid. An example would be using a filter to separate the pulp or other parts of a fruit from the resulting juice.

When a mixture is composed of two liquids that do not dissolve in each other and with different densities, this mixture can be separated by means of the decantation method.

Other ways to separate heterogeneous mixtures include sedimentation (waiting for one of the components to settle), centrifugation (separating the components by rotation).