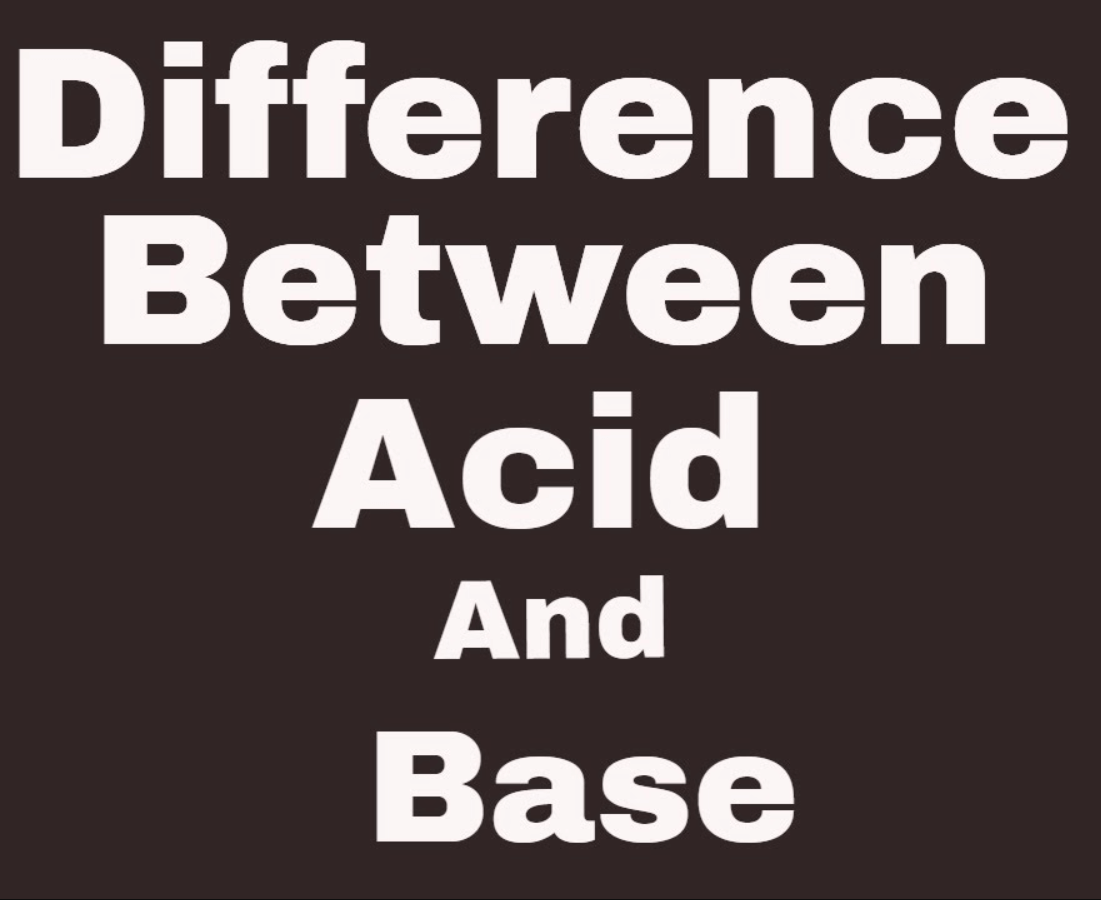 Difference between Acid and Base

What is an Acid?

An acid is a substance capable of releasing hydrogen ions in a solution. In addition, a compound that can receive a pair of electrons is also considered as acid.

The word “acid” comes from the Latin acids , which means ‘sour’ or ‘sharp’, and refers to the unpleasant taste of certain substances (for example, vinegar).

Acids can be considered strong or weak depending on how they dissociate in an aqueous medium, that is, according to the amount of hydrogen ions they release in a solution.

An acid is strong when it ionizes easily, that is, the vast majority of its hydrogen ions or protons are given up in solution. These acids are highly corrosive and good electrical conductors.

In contrast, weak acids are those that do not release a large amount of hydrogen ions and are less corrosive than strong acids. Examples of weak acids are carbonic acid (H 2 CO 3) and acetylsalicylic acid (C 9 H 8 O 4).

Examples of Acids in everyday life

What is a base?

As for the weak bases, these are those that partially dissociate. Examples of weak bases are ammonia (NH 3) and sodium bicarbonate (NaHCO 3).

Characteristics of the bases

Examples of bases in everyday life

Theories of acids and bases

Historically, these substances have been studied based on their properties and interactions with other elements. There are various theories that explain these phenomena and that are still in force.

Arrhenius acid and base theory

According to the Swedish chemist Svante August Arrhenius (1859-1927), an acid is a substance that releases hydrogen ions H + in an aqueous solution (water).

In the theory of electrolytic dissociation of Arrhenius (1887), acids are compounds that possess hydrogen and that, when dissolved in an aqueous medium, release hydrogen ions (protons) or hydronium (H 3 O + protons surrounded by water molecules). In this case, electrolytes (anions or captions) are capable of conducting electrical charges.

For its part, the base is a substance that dissociates a negatively charged ion (anion) hydroxide (OH -) in an aqueous medium.

The Arrhenius definition has the limitation that it does not consider reactions in which there are no aqueous solution, nor those basic compounds that do not release hydroxide.

Arrhenius acid and base example

The Danish scientist Johannes Nicolaus Bronsted (1879-1947) and the English scientist Thomas Martin Lowry (1874-1936) published studies (1923) in which acids are defined as substances with the ability to donate or give up protons (hydrogen ions H + without its negative electron) to another that must accept them. As for the base, this is a substance capable of accepting protons (H +) in solution.

Within this theory, acids are not restricted to dissolution in water, other solvents are also included.

With the Bronsted-Lowry theory, the notion of conjugated acid-base pairs is introduced, by a proton transfer, in which the acid donates them and the base accepts them. In this case, acid and base coexist, since an acid can only act in the presence of a base and vice versa.

When an acid donates a proton, this acid is called a conjugate base. The same happens, on the contrary, when a base receives a proton. This base is known as conjugated acid.

A neutralization reaction occurs when an acid and a base produce water and a salt.

The American scientist Gilbert Lewis (1875-1946), proposed a theory at the same height (1923) in which the Bronsted-Lowry theory was presented. For this scientist, an acid is a substance capable of accepting a pair of electrons.

This definition of acid includes all Bronsted-Lowry acids, since hydrogen ions (protons) are electron receptors, and it encompasses many other substances that do not contain hydrogen.

In Lewis theory, bases are substances that have the ability to donate a pair of electrons.

By including Bronsted-Lowry acids and bases (proton donors and receptors, respectively), the Lewis theory also incorporates Arrhenius acids and bases (hydrogen and hydroxide ions that react in an aqueous medium).

Also know the Difference between organic and inorganic compounds.

Each movement from one point to another on the scale is logarithmic, which means that one step increases or decreases the acidity / basicity 10 times with respect to the step immediately below or above. That is, if the acidity of vinegar is pH 3, the acidity of lemon juice is 10 times higher, with a pH of 2.

Water has a pH ranging from 6.5 to 8.5, where the pH of pure water is 7 (which are considered neutral). When water has a pH lower than 6.5, it can have toxic metals in its composition, being corrosive and acidic. When its pH is higher than 8.5, it is called hard water, more basic or alkaline, with a higher presence of magnesium and carbonates.