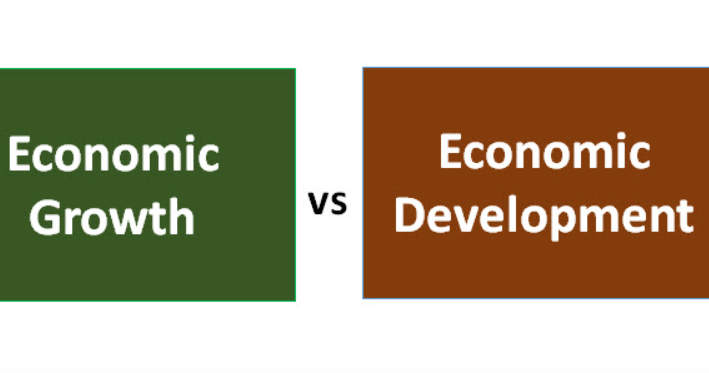 The difference between economic growth and economic development is that growth has to do with increasing the productivity and income of a territory. For its part, development focuses on measuring improvements in the living conditions of a population.

In this sense, the concepts of economic growth and development are essential to evaluate the performance of the countries with respect to the achievement of their economic and social objectives.

However, the relationship between economic growth and development is unbalanced. A country can increase its income and productivity, but this is not always reflected in its development rates.

On the other hand, when a population achieves individual improvements from the increase in its income, this has an impact on the economic growth of the territory they occupy.

Economic growth is understood as the increase in the income of a locality, territory or country. These revenues are generated by an increase in the productive capacity or by a rise in the price of its goods and services, which is reflected in its Gross Domestic Product (GDP).

Economic theory holds that economic growth brings with it further development. However, practice has shown that inefficient management of the income received by the State or the lack of coherent and sustained economic and social policies can impede such development.

Economic development is a macroeconomic concept linked to the increase in qualitative indices of a given population.

In economic theory, development indicates an improvement in people’s living conditions. It is assumed that this has an impact on the economic growth of a country, since the increase in income generates a higher level of consumption of products and services.

Similarly, it is understood that an improvement in the population’s living conditions increases their opportunities to actively participate in the productive process of a country, reducing inequality.

On the other hand, while development is closely linked to economic growth, it does not necessarily depend on it. A population can improve its living conditions for other reasons, such as foreign aid or the growth of the informal economy (which is not taken into account when measuring economic growth).

Since quantitative indices are not sufficient to measure the increase in well-being, the United Nations Development Program (UNDP) created the Human Development Index (HDI) in 1990.

This indicator is used to measure the quality of life of citizens based on three factors:

In order for tangible and sustainable economic development to be generated over time, the interrelation of multiple quantitative and qualitative factors is required. Some of the essentials would be: