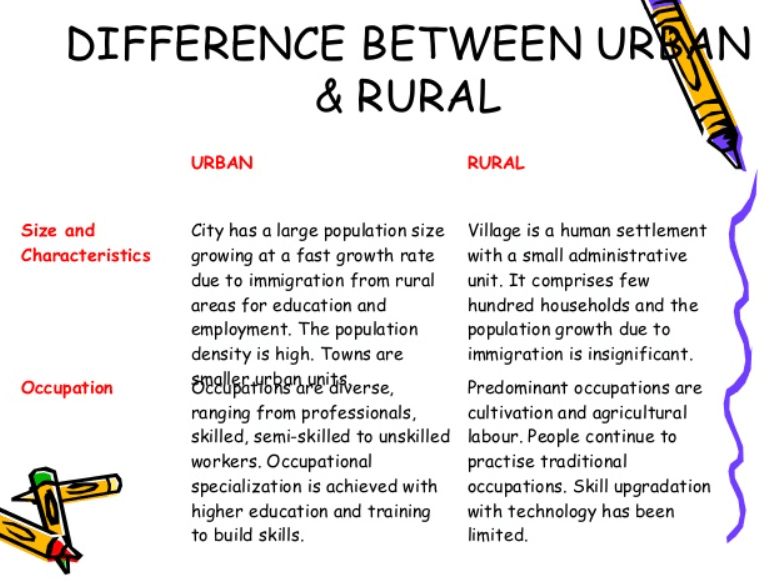 The rural population is the group of people who live in the fields, far from the metropolises. The urban population is one that lives in large cities.

Many times, people who live in cities have moved from rural areas in search of opportunities for work, study or leisure activities. For this reason the population density is higher in urban areas and spaces more reduced compared to rural areas?

Difference between Rural and Urban Population

According to the National Institute of Statistics and Geography of Mexico, a population is rural when it has less than 2,500 inhabitants, and it is considered urban when it is made up of more than 2,500 people. Let’s check below the difference between the rural and urban population.

What is Rural Population?

They are smaller populations than urban ones; they live in areas far from the big cities. The geographical spaces where they are found are usually quite large, they are generally fields.

The rural population is usually dedicated to the production of raw materials, such as agriculture, livestock and fishing. Therefore, they make a fundamental contribution to the agricultural production of a country, guaranteeing food for the entire population.

Because the rural population has fewer economic and technological resources than urban populations, there is higher unemployment and a decline in services.

The conditions of medical and care, educational and communication services are precarious. Generally, this is what causes population migration to urban areas.

The growth of urban centers since the 15th century has caused rural populations to lose power and importance, leaving many rural areas abandoned.

Characteristics of the Rural Population

What is Urban Population?

It is the one that is made up of a greater number of people compared to those who live in rural areas. This population is found in cities and large towns.

The area where the urban population operates is characterized by greater economic, technological, educational and professional development.

Access to the most advanced science and technology translates into a greater opportunity for education and employment in economic activities in the secondary and tertiary sector.

The urban population has a better infrastructure in all aspects; it is surrounded by large-scale industrialization, producing all kinds of products and services. Although this also entails problems such as the strong pollution produced by numerous factories, transport and people.

In addition, the large number of people that make up urban populations causes the development of neighborhood areas in marginalized areas, where they live in precarious conditions.

Characteristics of the Urban Population