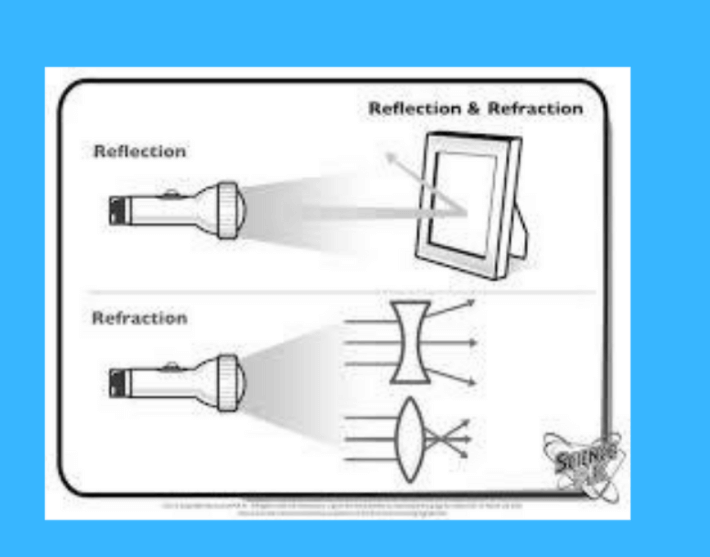 Reflection and refraction of light are two physical phenomena that a ray of light can experience. In reflection, the light ray bounces off a surface, while in refraction the light ray that passes from one medium to another changes its angle of propagation.

Difference Between Reflection and Refraction of Light

What is Reflection of Light

The reflection of light is the phenomenon that occurs when we have the sensation that a ray of light is bouncing off a surface.

What actually happens is that the light beam is returned when it collides with a medium other than the one it is traveling, as would happen when a ball is kicked against a wall.

In the reflection of light you can distinguish the original ray or incident ray and the ray that is returned or reflected ray. At the point where the incident and reflected rays meet, an imaginary line is drawn perpendicular to the surface, known as the normal.

Laws of Reflection of Light

The laws of light reflection explain the propagation of the light beam when it is returned. There are two laws:

Examples of Reflection of Light

Reflection of light occurs in nature in many situations and with various applications.

In many places sunlight is used for cooking, through solar ovens, designed with polished curved surfaces that reflect and concentrate the rays in a small area.

The French National Center for Scientific Research built a solar furnace in Odeillo to study the properties of materials in high solar temperature environments. This oven is based on the concentration of solar rays by reflection, achieving 1000 kilowatts per square meter.

A mirror is a smooth surface where light beams bounce and an image is formed by the reflection of light. The most common mirrors are flat mirrors made from a piece of glass covered on one side with silver or aluminum nitrate.

A kaleidoscope is an optical instrument that consists of a tube with interior mirrors and pieces of colored glass. As the kaleidoscope is rotated, figures of varied multicolored patterns are formed as a result of the reflection of light inside the toy.

Total internal reflection is a special reflection that can be observed in gems, such as diamonds. In this case, the light enters the diamond at such an inclination that the rays are reflected inside the crystal, bouncing the rays against the internal faces.

Sometimes we can see a diffuse circle that surrounds the sun. This is produced by the reflection of sunlight on the surface of the water droplets floating in the atmosphere.

What is the Refraction of Light?

The refraction of light occurs when light passes from one medium to another. It is the phenomenon that explains why a straight object looks bent when we put it in water. The ray of light is deflected when passing to a different medium than the one it came from.

Refraction of light can occur simultaneously with reflection. For example, if light falls on one face of a glass block, it is reflected and refracted at the glass-air boundary.

Laws of Refraction of Light

The laws of refraction explain how this phenomenon occurs. It was the physicist and mathematician Christiaan Huygens who deduced these laws that are summarized in:

First law: the incident ray on the separation surface of two media, the normal to the surface at the point of incidence and the refracted ray are in the same plane.

Second law: the refractive indices n 1 and n 2, the angle of incidence α 1 and the angle of refraction α 2 are related by the following expression:

When the light is incident perpendicularly (angle of incidence equal to 0) there is no deflection of the light, that is, the incident ray follows its linear path.

Examples of the Refraction of Light

The refraction of light explains many of the phenomena we encounter in our day to day life. Let’s look at some examples.

When a straight object, such as a pencil or straw, is put into a glass of water or other liquid, it appears to break.

Water has a different refractive index than air. So when we see objects or beings inside an aquarium, we can see more than one image.

The refractive index of a substance is used to indicate the concentration of some compounds. For this, an instrument called a refractometer is used, where a few drops of the solution are placed on a prismatic surface, and the angle of refraction is measured.