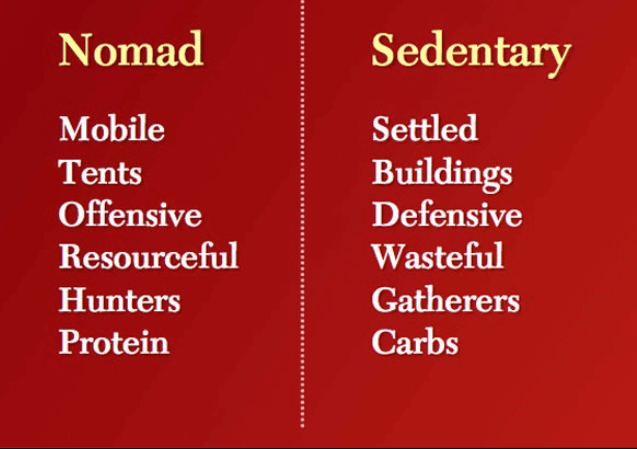 Nomadic and sedentary are human groups that have different ways of life associated with geographic displacement. Nomadic are constantly on the move. On the other hand, the sedentary settle definitively in a place.

Nomadic or Nomadic are people who live in nomadism. This implies constant mobilization in search of food sources or favorable climatic conditions for survival.

The sedentary are people who live in a sedentary lifestyle, a way of life that avoids geographical displacement. The sedentary settle and organize in a determined territory permanently, because it has what is necessary for their subsistence.

What is the Difference between Nomadic and Sedentary

The difference between Nomadic and sedentary is that the former live a territory temporarily, while the sedentary settle in a place permanently. Let’s check below is further more detail.

Nomadic peoples emerged in prehistory, about 100,000 years ago, when human groups began to move from what is now Africa to the rest of the world.

These displacements gave rise to a slow process of population of the planet that began in what is now the Middle East, continued in Asia, Europe, and America and culminated in Oceania.

Currently, the nomadic population of the planet is estimated at about 30 million people. These are some nomadic groups around the world:

The Nomadic were characterized by not having a fixed territory to live in. Their home and their activities were determined by their permanent displacement, as we will see below:

The nomadic peoples were characterized by building houses with very vulnerable structures, since they were made with the natural materials available in the place, such as branches and animal skins.

Although they were very fragile structures, they were very easy to dismantle when leaving the temporary settlement. The yurt, for example, as seen in the image, is an example of a nomadic dwelling.

For a long time it was estimated that Nomadic subsisted on hunting, but today it is known that most of their diet depended on vegetables and fruits. This is for a practical reason: it is much easier and safer to gather food from the ground than it is to hunt.

The animal protein obtained in hunting and fishing made up only 40% of the Nomadic’ diet and depended on the species available in the temporary settlement area.

For Nomadic, food had a higher value than tools. It was a resource used to promote reciprocity within the group (sharing food avoided social exclusion) or to socialize with other nomadic peoples.

Nomadic tools were fairly basic, such as stone axes and rudimentary knives. The lack of variety was due to the easy access to the resources collected and because, being towns in constant displacement, they had to travel with the least amount of cargo possible.

Sedentary peoples practice sedentary lifestyle, a way of life in which human groups select a territory to live permanently. This selection depends on certain characteristics, such as the quality of the land, the climatic conditions, the distance with respect to other populations, etc.

The origin of sedentary peoples dates back to the Neolithic, about 10,000 years ago, in what is now known as the Middle East. The Nomadic eventually stopped moving and began to settle permanently in those territories that would guarantee their long-term survival, becoming sedentary.

Today, most of the world’s population is sedentary. The most representative examples of sedentary peoples in the American continent would be native communities, such as:

Characteristics of the Sedentary

The fundamental characteristic of the sedentary is the discovery of agriculture and animal husbandry as means of survival. It was these activities that led to the end of displacement, the construction of permanent houses and the creation of the first human settlements.

As sedentary peoples needed to protect themselves from external threats, such as the weather, or predators permanently, their homes had to be much more resistant than when they were Nomadic. For this reason, they began to incorporate mud and stones into their structures.

The essential activity that differentiates sedentary people from nomadic life is agriculture. Thanks to this, sedentary people discovered that they could have a fixed source of food without having to move.

Animal husbandry became an essential activity, since it prevented them from depending on the animals available for hunting; they also protected themselves from the risk of facing predators.

With these two activities, the diet and living conditions of the sedentary improved greatly, which favored their chances of survival and contributed to the expansion of their way of life.

The sedentary began to specialize in the manufacture of tools made of wood, ivory and animal antlers, such as:

The sedentary also honed their skills in making stone knives, which were much sharper blades, made from flint rock, also called flint.

The sedentary also built wooden thrusters to increase the range of their spears (something like what we know today as a slingshot, sling, or slingshot). They also made needles, with which they possibly sewed animal skins to cover the body.