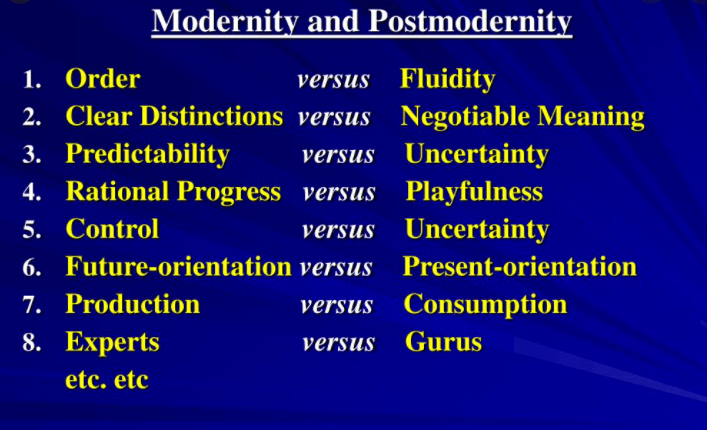 Modernity and postmodernity refer to two movements or currents of European thought that were based on historical criticism and the proposal of new social values.

Postmodernity is a movement that emerged in the second half of the 20th century that is based on the critique of modernity and the conviction that this movement has failed in the search for a new vision of the world based on progress.

Difference between Modernity and Postmodernity

Let’s check below what is the difference between Modernity and Postmodernity.

Modernity is understood to be an intellectual movement that had its philosophical origins in the 15th century, during the Renaissance, but which crystallized during the 18th century. It was at that moment that his proposals finally materialized in light of the political, economic, social and cultural changes that took place at that time.

Modernity promoted individuality, the use of reason, the protection of citizens’ rights and a new political order was key to the reorganization of power structures in Europe, by introducing concepts such as the nation-state and separation of powers.

The idea of ​​progress in modernity revolved around three essential axes:

In more detail, these would be some of the essential characteristics of modernity:

Modernity raises an idea of ​​progress and social evolution based on knowledge and expressed in science, economics, philosophy, law and politics as central knowledge. In modernity there is no place for the mythological or mystical narrative posed by religion.

Modernity proposes liberation of doctrinal thought in exchange for subjectivity and individual thought. According to this current of thought, reason and logic must displace religious doctrine as a resource to explain the nature of things.

For modernity, man is the new epicenter of the world, since all reason and logic and, therefore, all methods and science that will allow social progress start from there.

The end of the feudal model brought with it a new form of territorial political division proposed by modernity: the nation-state.

These are portions of defined territories with a constant population and a power structure divided into three central institutions:

Postmodernity is a current of thought that emerged in the mid-twentieth century as a critique of modernity.

His main argument is that the model proposed by the predecessor movement failed, while the idea of ​​progress through knowledge is not enough to achieve the well-being of society.

While there is no clear starting and ending point for postmodernity, the fall of the Berlin Wall in 1989 is seen as the climax of postmodernity. While the global changes driven by the attacks of September 11 mark the decline of this system of thought.

The rejection of the ideas raised by modernity was the common thread of postmodernity, and it was expressed in different characteristics:

Postmodernity is responsible for emphasizing the failure not only of modernity, but of all the political, economic and social models that emerged from it. For postmodern thought, the new global dynamic is incompatible with the proposal of modernity.

For postmodernism, the mass media are (along with economic power) the new centers of power due to their ability to influence the masses. As a consequence, a homogenization of thought is generated that is contrary to the critical vision necessary to promote changes in the established order.

According to postmodernity, the capitalist dynamic driven by the Industrial Revolution has been replaced by an economy based on consumption. This drives the massive production of goods and services that in most cases are ephemeral or expendable in nature.

The emergence of the internet, the web and social networks prompted a series of technological and social changes that result in a loss of individual privacy in exchange for instant information and communication.