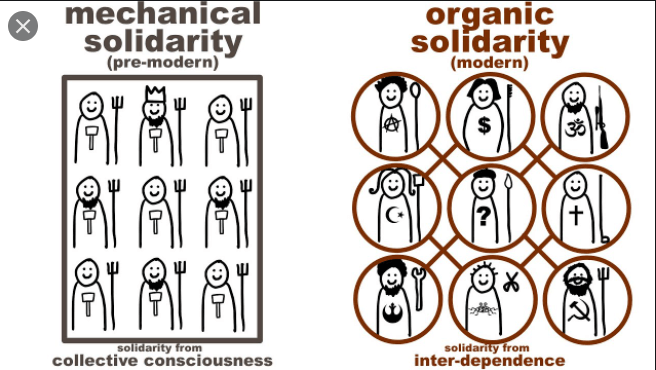 The mechanical solidarity happens when a society is composed of individuals who differ little from each other, and social cohesion is obtained thanks to the values, beliefs and rituals shared (collective consciousness). This type of solidarity is typical of pre-industrial societies.

In organic solidarity, in contrast, individuals are different from each other, social cohesion is produced by the division of labor and there is a high level of interdependence. This type of solidarity is present in industrialized societies.

Emile Durkheim (1858-1917) introduced these concepts in his work The Division of Social Labor (1893). For this sociologist, social solidarity refers to that which holds a society together, generating social cohesion. Mechanical and organic solidarity are forms in which social solidarity presents itself.

Difference between Mechanical and Organic Solidarity

Let’s check below what is the difference between Mechanical and Organic Solidarity.

What is Mechanical Solidarity?

It is a form of social solidarity composed of individuals who differ little from each other, and where cohesion is obtained thanks to the collective conscience (shared beliefs and values).

According to Emile Durkheim, this type of solidarity is typical of primitive or pre-industrial societies, in which the division of specialized labor was minimal or non-existent, and social habits and practices were common to all members of the group.

He considers it to be “mechanical” because of its similarity to the movement and grouping of molecules in the physical world. In this case, social molecules (individuals and small groups) can only act together, united to each other, without having their own movement.

Social differences between individuals are minimal and social norms are the same for all people. This results in a community of individuals with similar ways of thinking, feeling and acting, thanks to shared religion, politics and rituals.

The ties that unite individuals are based on family identity and the village, so it is a horizontal (similarity between individuals) and homogeneous society.

For there to be social cohesion, the collective consciousness must encompass the entire social world. Values, traditions, morals and other aspects of the daily life of the community are the basis used to dictate the way of being of the individual. He has a reduced individual consciousness and is considered as a part of a whole.

Societies in which mechanical solidarity predominates are characterized by having a low population and little interaction between their members. Durkheim called this phenomenon “moral density” (or dynamics).

In mechanical solidarity, punishment was used to atone for faults. The main function of the legal system was to protect community beliefs and traditions, even going so far as to regulate family life.

Crime is considered an act against the whole of society. This is why the repressive law acted on any threat that could undermine social cohesion and collective conscience.

The punishment was given by the group, being implemented against whoever committed the offense and, on occasions, it also involved their relatives or neighbors.

What is Organic Solidarity?

In organic solidarity, cohesion is born from the interdependence of individuals, caused by the division of labor and individual differences. Each individual is specialized in a particular job, so it requires others for its survival, as well as mechanisms that coordinate their differences. This type of solidarity is found in industrialized societies.

Unlike mechanical solidarity, Durkheim calls this solidarity “organic” because of its resemblance to the organs of a living being. Each organ is different and acts autonomously, but it needs to integrate with the other social organs to survive.

Another element of these societies is urban growth and the movement of people. More efficient means of transport, the exchange of goods and the birth of industry stimulate migration to the cities. Society is more heterogeneous, full of interactions between individuals with different origins and ways of thinking.

In a more vertical society, individuals with different origins coexist in the same space. This is why social relations are regulated by different bodies, thus ensuring that cohesion is maintained.

For Durkheim, in industrial societies, social anomie occurs when the integration of individuals weakens. This is caused by the individuality and interdependence that result from the division of labor. The common rules that govern society have less weight, causing the social order to be threatened in the absence of a collective conscience that unifies society.

In the transition from mechanical to organic solidarity, there is a risk that things will lose order and society will disappear. To prevent this from happening, voluntary agreements are created that bind those who take part in them: the State, as the central body, and the laws, which regulate these agreements.

Increased moral density, coupled with technological advances, stimulates a more complex and specialized division of labor. The struggle for resources increases, so specialization opens up other forms of survival.

Organic solidarity, caused by this division of labor, is characterized by a weakening of the collective conscience, which is not capable of maintaining social cohesion.

Integration occurs when the functions performed by individuals are diversified, making them more interdependent.

In industrial societies there is little self-reliance. Individuals need the services and products that others offer to survive. The role each one performs facilitates grouping.

Even when labor and economic competition is strong, the division of labor creates strong links due to this interdependence.

The restitutive right restores and repairs the damages committed by the offender. In organic solidarity, the punishments are less severe and are directed only against those who commit the crime (without affecting third parties).

Laws are more complex, having among their objectives to keep social agreements in order, protect private property, regulate social relations, as well as the role of each individual. It represents the birth of modern civil law.

Aspects such as religiosity, family life and romantic relationships come to be considered the private sphere.

Collective consciousness according to Emile Durkheim

For Emile Durkheim, the collective conscience is an element that seems to have a life of its own, and is shaped by all the beliefs, practices and rituals that the members of a society share.

In mechanical solidarity, collective consciousness is intense, covering the whole of society and producing social cohesion, while reducing individuality.

In organic solidarity, the collective conscience loses power due to the arrival of the division of labor. Since the population is more heterogeneous, different ways of thinking are found, giving way to a greater initiative of individual thought.