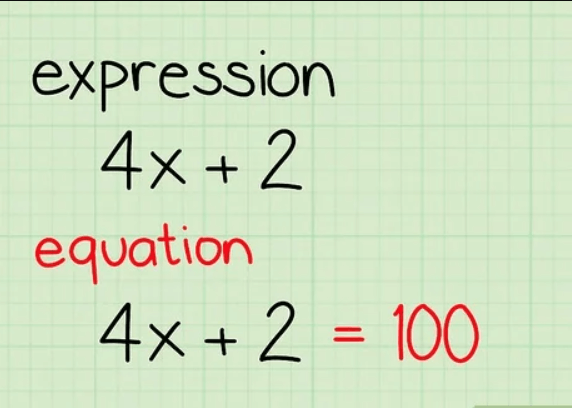 You might have heard the expressions equation and expression a lot in mathematics. Because they combine number and/or variable, many people misunderstand an expression for an equation. These two mathematical terms may not be the same. The difference lies in how they are arranged, which explains what they mean. It is easiest to determine if a problem is an expression, or an equation.

It is considered an expression if it doesn’t contain the equal to (=), sign. It can contain numbers, variables, and operators that show the value of something.

Difference between Expression and Equation

An expression in mathematics is a phrase that combines numbers (constants), letters (variables), or their combination joined with operators (+, +, *, /) to represent the value. An expression can be either arithmetic or algebraic.

It does not contain the equal to (=), sign, which means it doesn’t show any relationship. It does not have a left or right side. A simplified expression can be created by adding the terms together, or it can also be evaluated and values added to the variables to get a numerical value. Examples: 9x + 2, 9x + 9, 3p + 5 and 4m + 10.

The term equation is used in mathematics to mean a statement of equality. It’s a sentence where two expressions are equal. It is necessary to find the value of the variable in order to satisfy an equation. This is called the root or solution of the equation.

These points summarize the important differences between expression and equation.

The above explanation shows that there is a significant difference between the two mathematical concepts. An equation shows relationship, while an expression doesn’t. An equation has an ‘equal sign’ which means it can show solution or end up representing the variable’s value. An expression does not have an equal sign. Therefore, it cannot display the value of the variable.