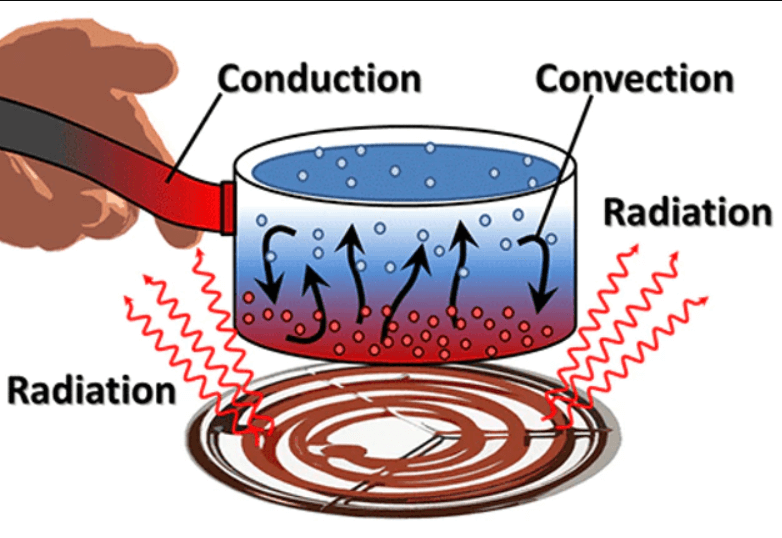 Convection, on the other hand, is produced by the movement of gases or liquids at different temperatures.

For its part, radiation is a transfer of heat without the bodies being in contact. Therefore, this occurs through the emanation of energy through electromagnetic waves.

An example that illustrates this would be that of a pot of boiling water: the fire heats the pot (radiation), the metal in the pot heats the water (conduction) and the hot water rises due to the effect of heat (convection).

What is the difference between Conduction Convection and Radiation

Let’s check below what is the difference between conduction, convection and radiation.

What is Heat Conduction?

Conduction is a form of heat transfer that occurs when two bodies are in contact or when heat passes from one side of the same body to the other. For example, if we heat one end of an iron rod, the other end will heat up after a while, despite not being in direct contact with the heat source.

The mechanism of heat transfer by conduction is based on the movement of atoms. As the temperature rises, the atoms move faster and also push neighboring atoms, transferring heat to them.

The ability of materials to conduct heat is known as thermal conductivity. For example, air has a low conductivity just like wood.

On the other hand, metals, such as aluminum and iron, have high thermal conductivity. These materials are very effective in conducting heat, as they have free electrons that transfer energy faster from hot areas to cold areas of the body.

What is Heat Convection?

Convection is the form of heat transfer that is produced by the movement of liquids and gases from hot areas to cold areas. When a fluid is heated, it becomes less dense, causing it to rise.

It is thanks to the convection process that clouds are formed: water vapor and hot air on the surface of the Earth rises and then condenses as clouds in the heights. This type of convection is natural or free, without the intervention of external forces.

On the other hand, forced convection occurs when a force is applied to move the fluid. This is what happens when we use fans to move hot air in a room, or when we move the contents of a pot over the burner.

What is Heat Radiation?

Radiation is the transfer of heat without contact between objects. This occurs through electromagnetic waves, such as visible light, ultraviolet, and infrared, which travel through space. For heat radiation to occur, the presence of material is not required.

Bodies emit heat by radiation, but they also absorb heat, depending on the difference in temperature. In fact, the bodies that absorb the best are also good emitters. For example, a black surface absorbs radiation better, but it also emits more than a white surface.

The operation of a thermos is based on concentrating the heat radiation inside. A thermos is built with a double wall of glass with no air between them, to avoid heat loss by conduction or convection. The silver inner wall reflects radiation without absorbing it, so the drink stays hot longer.